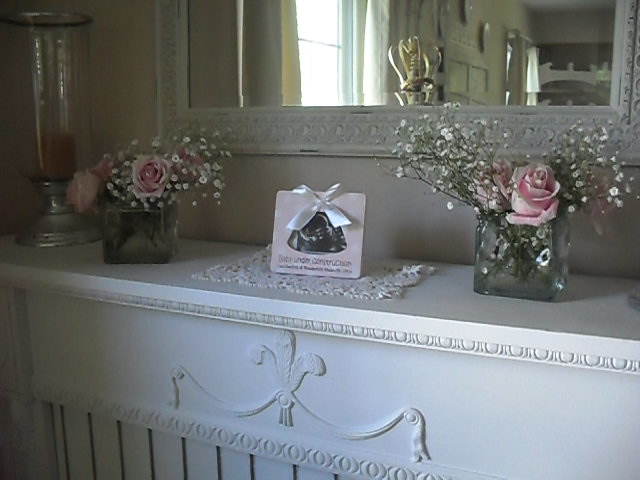 Swagalicious-is that a word? It is now!

I wanted to post the directions on how to make the carboard swags but after looking through my pictures I realized that I did not take any pictures. (sigh) I will try and post pictures another time with directions. The carboard or chip board as it is really called, is so easy to do. I am making a few for Christmas decorations. I will post the step by step instructions when I start on those projects. The picture below is of beautiful paper. I love paper as much as I love fabric. To start a chip board swag you must start with paper that you love and that coordinates. 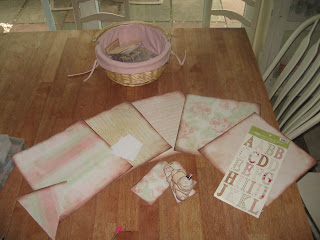 Here is the chipboard swag that I made for baby Julianna's baby shower. If you click on the picture you can get a better idea what the swag looks like. 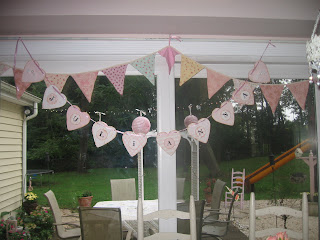 Posted by Adrienne Davis at 3:49 AM No comments:

My mom surprised me with a little gift from my Cousin/Godmother. She gave me some lace doilies and this beautiful hand towel! My Aunt hand stiched this towel. It says "Friday" on the bottom of it. I assume there might be more towels some where or maybe Friday was her favorite day of the week. (it's mine!) and it was the only one she did. ( I will have to ask) 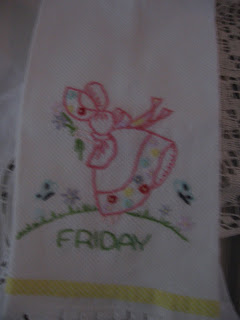 Here is the hand towel with the other lace pieces she gave me. I love the fact that these pieces were in my family and they are being handed down. They came all the way from Pureto Rico. I can assure you that the little hand towel will not be used for wiping hands. 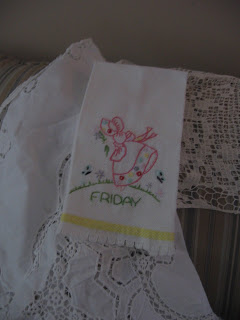 Posted by Adrienne Davis at 10:58 AM No comments:

Camping with the Cousin's

Last weekend we went camping with the cousin's. Mark's oldest brother brought a nice condo tent and his family (4 kids and his wife) slept in it for 2 nights. 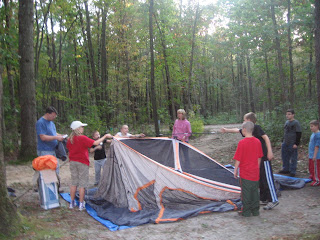 It was a family effort to get the tent up and going. 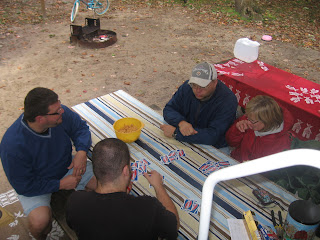 Here are some of the adults playing phase 10 while the younger children were at the park. 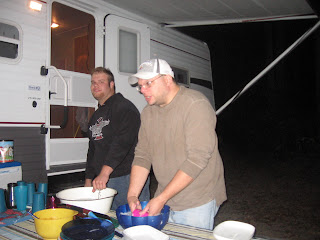 Uncle Brian and Cristian doing the dishes!!! We had to do dishes outside because our hose was not long enough to tap into the water source at the camp ground. 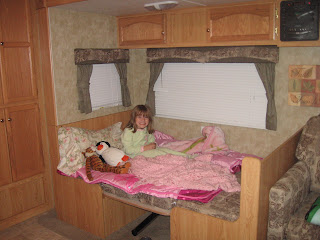 Isabella getting ready for bed. Normally this area is a table but at
night it converts into a bed. 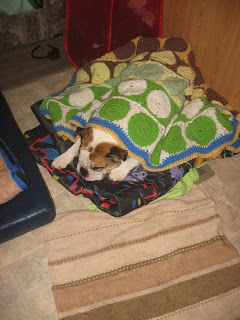 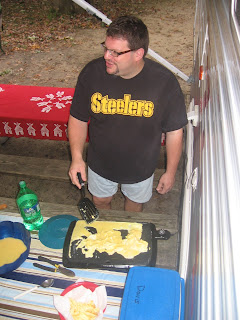 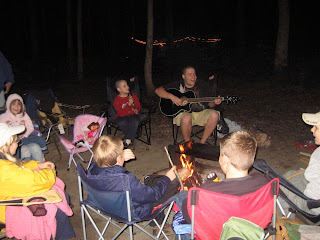 This is my favorite part of camping-Joey playing the guitar while we all sit around the camp fire singing. 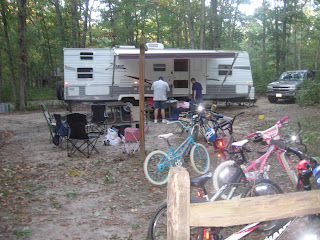 The camper all set up and ready for a weekend of fun. This will probably be our last trip out in the camper- bummer!

Posted by Adrienne Davis at 3:02 PM No comments:

I don't know where to begin this post so, I will begin at the beginning. Twenty one years ago, I made a commitment to follow Christ. I realized that without him life was no life at all. I knew that I was in need of a savior and yet I believed in God- wasn't that enough? NO. God isn't looking for a few good men, he doesn't want just a part of you, he wants ALL of you. He wants a relationship, a personal relationship. How often we try to fit God into our own little box- we think we know how he works and so we make up great things in our minds on what faith is all about and yet we are sooooooooo far from the truth- why? because we don't want to read his word. If we read the bible-we will have to change- you will have to change- and if we are honest with ourselves we don't want to change. Selfishness is America's new mantra. If it feels good do it. Look out for yourself because nobody else will. Anything and everything goes.

When I logged on to the Internet this morning I noticed the news headline. There was a beautiful cross on a hill but next to that picture was another picture. It was the same picture of the cross but the cross had been covered with plywood. It no longer could be seen. This cross was erected 75 years ago in honor of the WWI soldiers but a Federal Court ruled that it violated our constitution! This is what America has turned into. A country founded on Christian principals is slowly dyeing-If this bit of news does not bring you to tears then we are in a sad state!

What do you believe about God? Do you know where you are going once you leave this earth? Do you belive there is more than one road that leads to God? Is faith just some word that you toss around when it is convenient? OR do you know who Jesus really is? Do you know what price he paid on the cross for me and you? It isn't enough to know it. If you don't believe it and ask him into your life then you will not enter into the kingdom.

"Not all people who sound religious are really godly. They may refer to me as Lord but they still will not enter the Kingdom of Heaven. The decisive issue is whether they obey my Father in heaven. On judgement day many will tell me, Lord, Lord, we prophesied in your name and cast out demons in your name and performed many miracles in your name." But I will reply, "I never knew you. Go away; the things you did were unauthorized."

How many people walk around saying they believe in God?? Most of America believes in God, yet look at the state of our country! It is illegal to have a cross standing in memory of dead soldiers! Don't wait- if you believe in God- read his word and start living like a believer.


Knock on that door today!

Love,
Adrienne
Posted by Adrienne Davis at 3:47 AM No comments:

We love you Janet party! 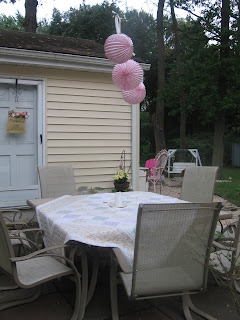 I hosted a baby shower......... woops- this really wasn't a baby shower-it was a "Welcome Julianna/we love you Janet party!" This is Janet showing us one of her many great gifts. 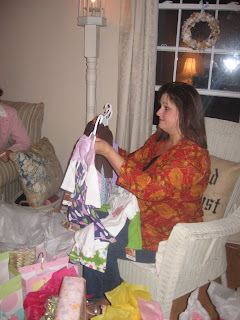 This is a very surprised Janet opening up gifts. The present? A beuatiful baby blanket made by Michelle S. Now, we all want to make one in big people size! 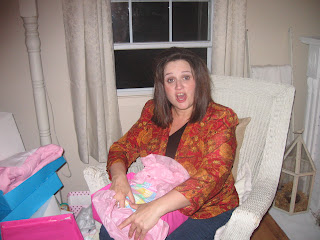 This is a picture of the outside. Originally, I had planned to have the shower outside but the weather was making me nervous. I moved everything inside and set up a few tables outside for people to eat at. 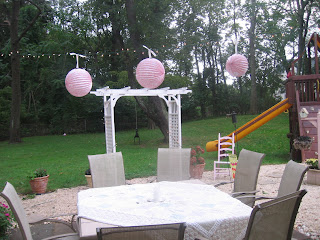 This is the food table. I am planning on posting the rest of the picture as a slide show. 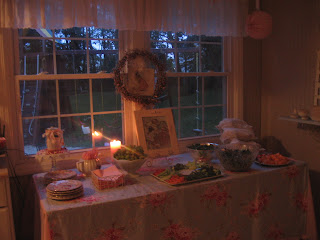 Posted by Adrienne Davis at 7:02 AM No comments:

My new furniture came yesterday and I was so worried that I wouldn't like it. I picked the style out but had them change the fabric. Those darn swatches are so small it is hard to tell what it will look like in the end. I decided to go with blue this time. I have had red for so long. I am very happy with it. I want to make some pillow's for the couches- I have in mind what I want but don't think I will find it in the stores. 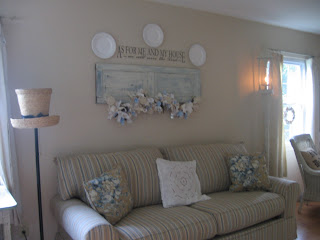 This is the fireplace area. I decorated it for fall. That is about as fall-ey as it gets around here! 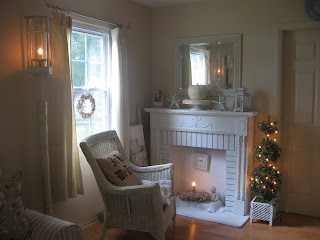 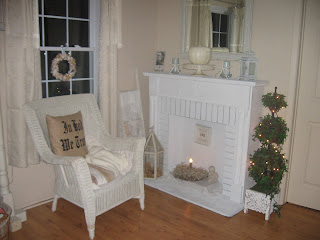 Here is another picture taken when it was dark outside. I really need a new camera! If you click on the picture it enlarges and you get a better look.

Posted by Adrienne Davis at 5:28 AM 2 comments: 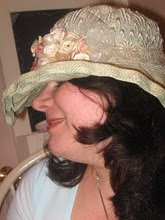 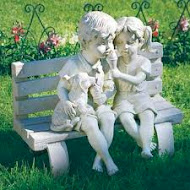